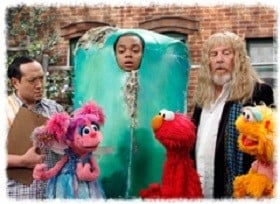 Vergil Von Vivaldi, played by Michael McKean, has come to Sesame Street to start a rock band made completely out of rocks! Vergil sings a song to show that there are rocks all over Sesame Street. He points out that the sidewalk, a statue in the garden, and the building are all made of rocks. Elmo and Abby join Vergil to search for rocks and try to identify their names based on their characteristics. First, they find a tiny rock, called a pebble. It is too light to be the singer of the rock band, but can be the tambourine player. Elmo then sees a heavy rock. It will play the gong in the rock band. Zoe comes by and suggests Rocco could be the lead singer. The group observes that Rocco is a rock called basalt, which means it came from a volcano. Unfortunately it has too many holes, so he can’t be the lead singer but can play the bass. Elmo finds limestone with fossils of leaves and shells on it from a long, long, long time ago. Vergil says the limestone can play the flute. Zoe finds a shiny rock called obsidian. It will play the oboe. Then, Abby finds marble that is sparkly and colorful. Marble will play the mandolin. Since they haven’t found a lead singer, Abby finally changes Vergil into a smooth, crystal like, sparkly rock called a gem. He can be the lead singer. The only thing left to do is… rock!