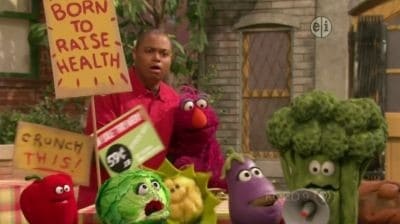 Chris serves Telly a tuna sandwich with no lettuce just when a group of vegetables is heard nearby. They are holding picket signs, while marching and chanting. Anderson Cucumber, a reporter for VNN, arrives to find out what’s going on. The vegetables aren’t taking it anymore. They think no one likes them and they don’t feel appreciated, especially because Telly didn’t order lettuce on his tuna sandwich. Telly explains he was actually going to have salad on the side. Everything seems okay now until Zoe leaves broccoli on her plate. Chris encourages Zoe to eat her broccoli, but she would prefer to dance. So, Chris introduces The Veggie Dance! All the dancing makes Zoe hungry, so she tries the broccoli and loves it! This makes the vegetables happy until Anderson Cucumber reports that Cookie Monster is eating cookies instead of vegetables. Chris helps Cookie Monster pretend that his vegetables are cookies, such as a delicious broccoli cookie. Cookie Monster devours the entire plate of vegetables! Another victory for the vegetables! Shortly after, baby Natasha refuses to taste the strained vegetables that Gina is feeding her. The vegetables become offended again and plan to leave, but Chris explains that Natasha is just a baby, and everyone else on Sesame Street loves vegetables. However, by the time everyone finishes singing “We Love You Vegetables,” even baby Natasha has eaten her peas!