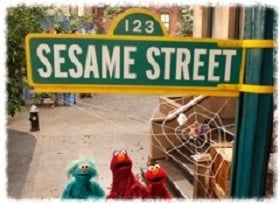 Elmo, Telly, and Rosita wait for the Itsy Bitsy spider to appear on a water spout in the arbor. Chris loves the song “Itsy Bitsy Spider,” so they all sing it together. After Chris leaves, they decide to find Itsy Bitsy. First, they think about where bugs are found: near plants, flowers, and in dirt. Using the clues, they decide the Itsy Bitsy Spider might be in the garden. When they reach the garden, Telly observes a bug with six legs but they find out it’s a beetle, not a spider. The beetle teaches them that a spider is not an insect, but an arachnid, or a bug with eight legs. They come upon a second bug, but it’s another insect- a hopping grasshopper! The grasshopper gives them the clue to check the spider’s home. Rosita spots an ant hill, but they find out that ants, not spiders, live in ant hills. Then they count the ant’s legs and realize it’s an insect, not an arachnid. The ant gives them the clue that a spider lives in a sticky and stringy place. Elmo realizes that they need to look for a spider web. Telly finds part of a web and follows the string until they reach the Itsy Bitsy Spider! But Itsy Bitsy explains she has more important things to do than sing “Itsy Bitsy Spider.” She is waiting for her egg sac to hatch. Suddenly, the sac hatches, and Telly, Rosita, and Elmo watch in awe as the tiny baby spiders are born!